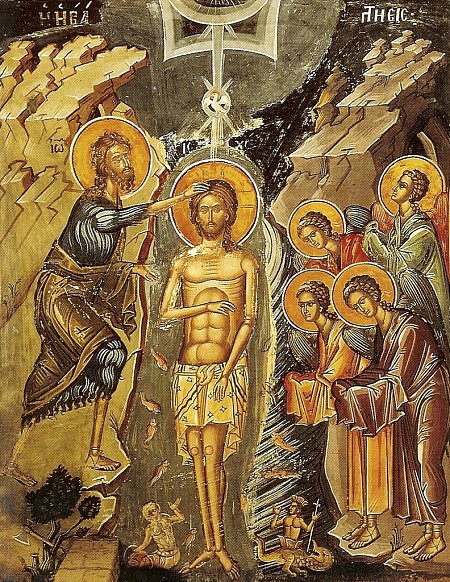 Special Liturgical Texts for the Afterfeast

Scroll down for resources on Theophany . . .

In anticipation of the Great Feast of Theophany,

here are links to Theophany Meditations by Fr Steven from previous years:

• I Believe in One Baptism for the Remission of Sins

• He was cleansed for All Mens' Sins

• St Gregory of Nyssa on Baptism: 'Make It Clear Who Your Father Is!'

• Rebuking the Tempter and Following Jesus

Feast of Theophany ~ The Baptism of Christ in the Jordan


We now approach the day of Theophany, the day in which the divinity of Jesus is revealed to us through His baptism by John in the Jordan River. On this day we know Him as the Son of God who came for our salvation. Although one could argue that His birth should be seen as Theophany, up to this time Jesus was not known by many. As John the Baptist says at this event, "Amidst you stands Him Whom you know not of" (John 1:26). Therefore, we call the day He was baptized Theophany because He became known to many at this time.
We can also see that this was the beginning of His work to create the path for our salvation with Baptism being the first step. Later He would establish the Church with its clergy where those who were joined with Him in baptism could continue to benefit from the grace filled sacraments.

Prior to this time there was a Jewish baptism which cleansed the body from impurities such as touching the bones of the dead, eating unclean foods, or being with lepers, but it did not remove sins. In Scripture it says, "Let one wash his body in pure water--and he will unclean until evening, and then he will be clean." (Lev 15:5, 22:4) This Jewish practice was a preparation of what was to come. The baptism that was established by Christ was much more as it was for the forgiveness of sins though the Holy Spirit and they were more than forgiven, they were absolved through grace. John the Baptist baptized those who repented of their sins but did not grant forgiveness through grace. Sins were not absolved through his baptism. John says, "I baptize you with water...That one however will baptize you with the Holy Spirit and with fire" (Mat 3:11).

Jesus came to be baptized by John not because he needed to be forgiven His sins, being sinless, nor to receive the Holy Spirit, being one with the Spirit already, but to show us the path we are to take to be relieved of our sinfulness and to receive the Holy Spirit to abide within us. John's baptism in water was also a preparation so Christ would be known and so we could receive this sacrament. Because John was known as a prophet, his baptism of Christ had great meaning to the people so they would believe that Jesus was the Son of God.

On this day, as John baptized Jesus in the Jordan River, the Holy Spirit visibly descended in the form of a dove. St. John Chrysostom tells us that this descent as a dove was like a pointer. He says, "Did you see, that the Holy Spirit did not descend as in a first time then coming down upon Him, but in order to point out that preached by His inspiration--as though by a finger, it pointed Him out to all."

We rejoice at this Theophany for Jesus showed us the way for our renewal to begin. He was announced as the Son of God for all to see, submitting to John's baptism with humility.
Jesus says,  "Except you be converted and becomes children, you shall not enter into the Heavenly Kingdom." (Mat 18:3)


About the Feast, with Troparia & Kontakia

First of all therefore, it is necessary to say that there is not one Theophany, but two:

the one actual, which already has occurred, and the second - in the future - which will happen with glory at the end of the world. About this one and about the other you will hear today from Paul, who in conversing with Titus, speaks thus about the present:

“The grace of God hath revealed itself, having saved all mankind, decreeing, that we reject iniquity and worldly desires, and dwell in the present age in prudence and in righteousness and piety” - and about the future: “Awaiting the blessed hope and glorious appearance of our great God and Saviour Jesus Christ” [Titus 2:11-13].

And a prophet speaks thus about this latter: “The sun shalt turn to darkness, and the moon to blood at first, then shalt come the great and illuminating Day of the Lord” [Joel 2:31]....

Today the Father and the Spirit witness jointly to the Son . . . 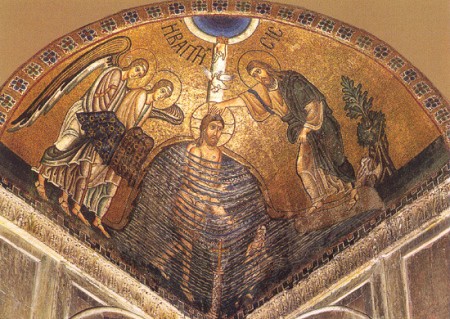 AT THE COMPLETION OF THE THIRTY HIDDEN YEARS in which he had passed through all the stages of the common life of man and had shown exemplary humility in all that he did, obedient to his parents, and submissive to the Law, Our Lord Jesus Christ entered upon His public ministry—the path that would lead to His Passion—by a dazzling revelation of His divinity For the Father and the Holy Spirit then bore witness that Jesus is truly the Only Son of God, consubstantial with the Father, Second Person of the Holy Trinity, Word made flesh for our salvation, the Saviour foretold by the Prophets; and that, in His Person, the Godhead is united without admixture to our humanity and has made it shine with His glory. Hence this feast of the Baptism of Christ has been called the Epiphany (‘manifestation’) or the Theophany, that is to say, the showing forth of the divinity of Christ and the first clear revelation of the Mystery of the Holy Trinity.
On many occasions before this time, God had made Himself known by miracles, signs and wonders, in dreams and visions, through the mediation of Angels, in the inspired messages of His servants the Prophets, or by His providential interventions in the history of Israel, in order to teach, to punish or to console His stiff-necked people, which was always inclined to idolatry and to polytheism. Consequently, it was His UNITY that He made known to them in those days, with power. Ι am He Who is, He said to Moses in the bush (Ex. 3:14); and when He revealed Himself in fire on Sinai, He said: "Hear, O Israel: The Lord your God is one Lord; and you shall love the Lord your God with all your heart, and with all your soul, and with all your might" (Deut. 6:4; Matt. 22:37).
But today the Father and the Holy Spirit witness jointly and severally that the man emerging from the waters is the only Son and Word of God, Who, by His Incarnation, has revealed to us the Glory of God and has given us to know that the unique divine nature is, in a manner beyond all utterance, shared—without being divided—by the Father, the Son and the Holy Spirit. The Father is God, the Son is God and the Holy Spirit is God: not three Gods, but three Persons (hypostaseis) in a single nature (essence). Like three suns or three luminaries, they are united without confusion in their single light. This mystery of mysteries, inaccessible alike to human thought and to the contemplation of the angels, has been made known to us by Our Lord Jesus Christ through His baptism in the Jordan and His baptism’ into death, and not simply in an external manner, for He has made us participants in it.

More Articles and Homilies on Theophany 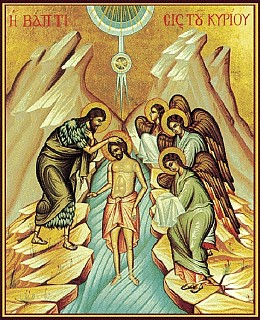 Discourse on the Day of the Baptism of Christ, St John Chrysostom

Why Did Christ Need to be Baptized?
The Blessing of Water
Why We Bless Our Homes